Fossilized Coral promotes qualities of ambition, leadership, vitality and good judgment.  Turns you into a person of positive thought and action, ready to take the helm and lead with the perfect balance of heart and head.  Great for courage and passion as well.

Fossilized Coral is a natural stone formed from ancient corals.  It should not be mistaken for protected and endangered coral reef from the modern oceans of today.  Of the varieties of fossilized corals found throughout the geologic record, exquisitely detailed specimens from the mountains of Indonesia are most unique and beautiful.

Corals have been growing in the oceans around the world for almost 500 million years.

The corals thrived in warm shallow marine waters and over time were buried in sediments as the land surface was juggled by crustal plate movements or the oceans rose and fell. Temperature and pressure from compaction during burial, resulted in those deposits, in time, becoming rock and part of the present day geological record.

Decorative coralline limestone and marble are popular building materials and have been used for centuries.

For many years, ancient coral deposits have been mined for their high quality calcium, potassium, magnesium and sodium content which is used in health supplements. Fossil coral has also been used in fertilizers.  It has even been used in filters to remove impurities such as chlorine and formaldehyde from water.

Geodes formed by partial replacement or casts of coral heads by low temperature chalcedonic or opaline silica are found in Florida. Florida has even declared fossil coral to be the “Florida State Rock.”  The shapes and colors of these specimens from the Tampa Bay region, in north Florida and southern Georgia are unique. They are associated with Tertiary rock formations of 20 to 25 million years in age. 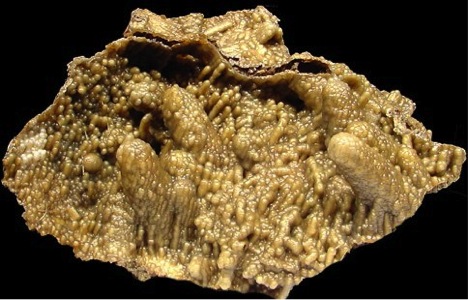 Silicification of Paleozoic Era corals such as the Devonian age (416 to 359 million years ago) Petosky Stone of the Lake Michigan region or on Prince of Wales Island, Alaska, are attributed to the large amount of siliceous sponges which flourished in the ancient warmer shallow waters. The sponges represent a likely source of mobile silica in the sedimentary pile. As the sponges decomposed, the silica was freed to replace the carbonate rich coral skeletons. Specimens are dominantly gray colored and exhibit a hexagonal pattern typical of primitive coral species.

Let’s begin with a brief review of the theory of plate tectonics. New ocean crust is created by upwelling basaltic magma along the mid-ocean ridges. Ocean plates move away from mid-ocean spreading centers and subduct under the continental plates. Subducting ocean plate material re-melts as it reaches depths under high temperature and pressure and becomes molten magma which seeps back up to the surface and erupts thru volcanic vents. This occurrence is most evident along the Pacific Rim, what is commonly known as the ring of fire, an area depicted by high incidence of volcanic activity.

Indonesia is located on convergent plate boundaries. Subduction of the northeast moving Indian Ocean plate under the western islands of the Indonesian archipelago has resulted in a long history of volcanic activity (FIGURE 4).

Extensive eruptions of volcanic debris have repeatedly buried forests and nearby reefs offshore as well.  During burial, the decay of the volcanic ash releases mobile silica and other elements which saturate formation waters and, in some situations, reacts with the carbonate of the buried coralline reefs or other organic matter, such as wood from buried forests.

The volcanic islands of Indonesia are host to numerous deposits of fossil coral. The Barisan Mountain Range, along the western boundary of the Island of Sumatra, hosts a rare and ornate suite of fossils. Miocene age (approx 20 million year old) coralline reefs and near shore forests were preserved by burial in volcanic sediments rich in minerals including iron, manganese and silica. Through a combination of processes, the full pattern and character of the original coral life forms have been preserved in great detail.

Permineralization is the process of filling pore space in and around the remnant hard coral skeleton with minerals deposited from solutions trapped or migrating thru the sedimentary pile as it is compressed into rock.

Replacement is the process whereby the original coral skeleton is replaced molecule by molecule with a mineral or minerals from a solution. For example, calcium carbonate (CaCO3) from the hard structure of the coral is replaced by silica (SiO2) from trapped or migrating solutions as rock was being formed.

This dual process preservation can occur with different accessory mineral concentrations and result in maintaining the contrast between the original soft tissues and the skeletal remains of the corals as different minerals impart different colors to the stone.

The geochemical and geological conditions under which these processes take place are typically slightly acidic, low temperature and low pressure. The resultant deposition of replacement product is a micro or crypto crystalline quartz commonly termed “agate”.

In Indonesia, entire coral heads are often completely preserved and appear just as they did 20 million years ago although their density is much changed by replacement and infill with silica, iron, manganese and other minerals. There are fern corals, brain corals, hex corals, honeycomb corals and many more. 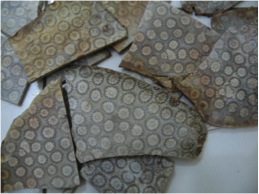 Specimen coral heads are found in many stages of preservation. Some are mere casts with thin replacement of the outer skin and a pumiceous, leached or partial replacement of the inner core. Other coral heads are completely preserved by the dual process and can make beautiful polished slab specimens (FIGURE 6). The silica ranges from light weight amorphous opaline to dense cryptocrystalline chalcedony. Re-crystalization is often found on fractures resulting in fine glittering coatings of quartz druze. Rarely, entire specimens are coated in fine crystals. The fossilized coral heads come in all sizes and can weigh from 100grams to 100 kilograms.

I found my first specimen while conducting a regional geological mapping program in South Sumatra in 1988. The smooth dark green, water worn cobble weighed about 2kg.  It was solidly agatized and the honeycomb coral pattern was well defined. Sadly, the driver later took it to a machine shop and ground the center out to make an ashtray. Such is Indonesia…

In 2001, local villagers had begun a brisk business of digging the coral and smashing it up with hammers then fashioning the chips into ornate cabochons and beads. 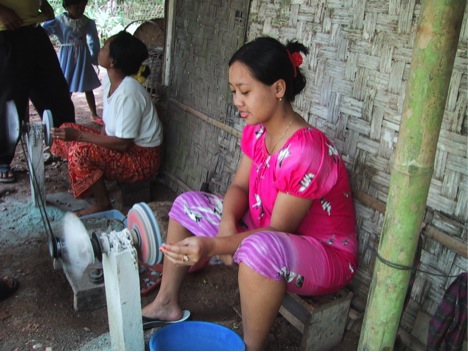 Other deposits have been identified along the Barison Mountain Range. A great many coral species are preserved in three Sumatran Provinces and there is an occurrence in West Java and another in East Java as well. The assortment of accessory minerals introduced with the silica, vary greatly in color, from white to red and yellow, purple and pink.